A couple of months ago we introduced you to the inimitable Samantha Bailey – Boutinot’s master blender and a woman whose own wine story is intrinsic to our own. She’s extraordinary. This time let us introduce you to Carlo Manera from Il Cascinone who is in his very own way an extraordinary individual too.

When you meet Carlo Manera, it’s not immediately obvious that he’s got a strong winemaking pedigree. He is to all intents and purposes a pretty understated guy; quietly spoken, charmingly embarrassed by his excellent English and curious about the world around him.

Having taken over as head winemakers of Araldica’s La Battistina estate in 2016, Carlo is now responsible for winemaking at all three single estates including Santa Seraffa in Gavi and Tenuta Il Cascinone in Asti. Back making wine in his home region, but his sense of what’s possible hasn’t been limited at all. Whether it’s the development of a Barbera Passito, experimentation with ceramic egg vessels at Il Cascinone, a Metodo Classico or barrel-fermented Gavi he’s not afraid to innovate at all. 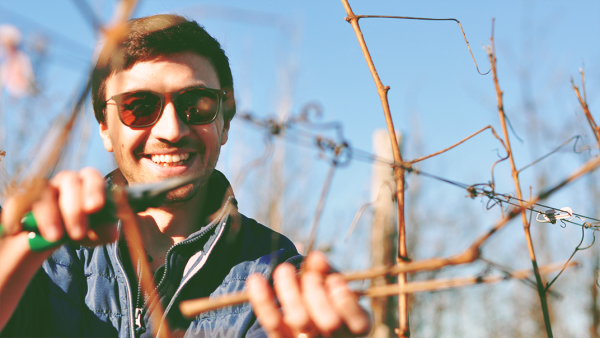 What I personally find fascinating about Carlo is that for someone so saturated by the world of wine, having lived it through every area of his life, he remains a committed student of the vine. He has done placements across the world to gain better insight into the styles and practices that winemakers adopt in regions outside his native Piedmont. From Chile, New Zealand, Argentina and Greece, to South Africa, Alsace and even alongside our own team at Henners in the UK – this is a man dedicated to his vocation who remains ever-inquisitive about what could be possible.

His latest projects though may well be the ones that have the longest-lasting effects. Carlo’s concern that it’s important for his winemaking to have the least harmful influence on the environment as possible has driven him to lead a number of sustainability initiatives that are being rolled out across the Araldica co-operative membership. You can read more about Araldica’s push to be a fully sustainable organisation in our blog post from a month back.

He may well be quiet and understated but his influence on the wines and long-term future of Araldica and its estates is significant. He’s an incredibly talented winemaker, who alongside the cooperative’s growers, who have generations of experience working the land, is producing some fabulous products and most importantly he’s a great guy, with care and empathy for those he meets while doing what he was born to do. That’s the kind of people we love to work with.

Our People, Our Stories