We visited quite a few estates on our German trip and we’ll be returning to visit a few more shortly. We certainly hope to add more during the coming year but curious, verging on inexplicable, self-restraint sees us start with just two new agencies… and what agencies they are! We’re genuinely thrilled to announce the start of our relationships with Weingut A.J.Adam and Weingut Horst Sauer. 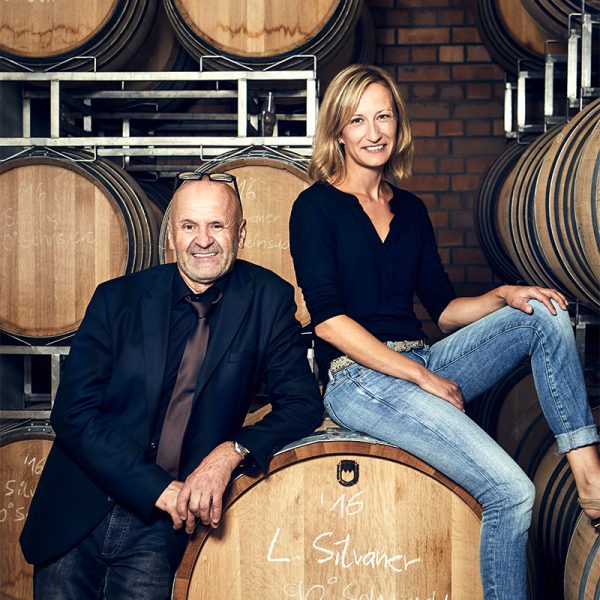 You turn off the 2260, drop down off the ridge, head through the slight cutting and turn right onto Bocksbeutelstrasse, it’s only then that you look back up the slope and see, in all its glory, the full majesty of the Escherndorfer vineyards… Lump, Am Lump and Fürstenberg. There are only two things you could possibly do with a huge, perfect, natural, parabolic, south facing slope like that… plant it with noble grapes or paraglide above it. As they hadn’t invented paragliders in the early middle ages…

So, the slope is the first thing to really make an impression, the next thing for me, a relatively frequent Alsace visitor is that Silvaner isn’t a country bumpkin, it’s ‘proper noble’, or it is here at least. It occupies just as much of the best parts of the vineyards as Riesling, and speaks every bit as eloquently.

Then the smell. We’ve all been in wineries that smell anything from distinctly ‘off’ through to quite pleasant… hopefully more of the latter than the former… but the Horst Sauer winery actually smelled like it was doing you good just being there like if you were a Doctor you might actually want to prescribe that to someone. By quite some way the most attractively, wholesome, delicious smelling winery I can remember visiting.

Horst and his daughter Sandra have 37ha in various extra-ordinarily fine parcels around the Lump and Fürstenberg including significant holdings in the Am Lump part of the slope, they make simply incredible wines.

The 1994 Escherndorfer Lump Silvaner Trockenbeerenauslese we were privileged to taste leapt straight into my all-time top 5… maybe my top three… maybe my top two? We tasted Silvaners, Rieslings, Müller-Thurgaus, Trockens, Auslese, Beerenauslese, Trockenbeerenauslese and a 2016 Müller-Thurgau Eiswein harvested in 2017! There wasn’t a single wine that was less than deeply impressive. This is a major new relationship for us, these are some of the World’s greatest wines.

And, incase you missed it, take a look at our feature of A.J Adams, too! Who said selling German wines was difficult?!

The Worlds second most expensive wine is Egon Müllers Scharzhofberger Riesling Trockenbeerenauslese at around £13,000 a bottle. For it to be ‘good value’ it would have to be 152.9 times better than this Escherndorfer… somewhat annoyingly, we haven’t quite got around to tasting the Müller wine yet but we’re nevertheless unanimous in thinking that that’s probably not a possible thing and that this, therefore, represents something of a bargain.

The vinous equivalent of Anthony Hopkins in ‘The Remains of the Day’, this wine conveys a huge amount without looking like its doing very much! Torque rather than horsepower, Rothko rather than Pollock, compact rather than expressive. There’s an incredible, pithy, sweet/sour intensity that’s undeniably sensuous and there’s just no doubt you’re drinking something ‘important’. Silvaner everyone… Silvaner that comes across like this… Wow!

Maybe less of a surprise than the Silvaner, we all know that Riesling CAN do this after all, but not one jot less of a joy. This is very cool, very authoritative, very click-click Riesling with a core of lime, peach, hay and maybe a suggestion of fresh nuts around the edges, and it’s undoubtedly smart and fine and you’re happy… then comes this incredible ‘swell’, this sense of barely restrained energy, this ‘Shove’! It moves the wine to a different place and seems to both increase its scale and slice you in two at the same time. It’s surely the voice of the vineyard.

Oh jeez, these are good wines! They aren’t cheap but hells teeth, you get your money’s worth. This ‘S’ Riesling starts tight and lean, tense and nervy… it’s quite exciting. Then you blink twice and the ‘exotics’ arrive, an overt marmalade tang, some lurid steely lemon and a whole lot of bare-naked peach. Don’t ask me what ‘yellow’ tastes like either, but it appears twice, once underlined, in my notes.

The ‘S’ incidentally is Horst Sauer code for dry ‘Spatlese’ quality wines. 10% of this Silvaner is fermented on the skins for 14 days and this definitely comes through with the wine having really lovely stony, pithy, spicy notes at the heart and a fine underlying richness, giving a beautiful, pure, persistent finish. The Silvaners here are a complete revelation. Jancis Robinson rates Horst Sauer as probably the World’s greatest producer of this variety.