In late December we packed our bags to go and spend a few days getting to know our new Hungarian producers, Nimród Kovács and Gábor Kardos. With temperatures hovering around zero, inaccessible vineyards caked in mud and snow closing in on both UK and Hungarian airports alike you could say it wasn’t the absolute best time to go, but with thermal underwear packed we pressed on.

Arriving late on our first night we headed over to the Budapest hills to meet our host, Nimród Kovács, we all expected to try some beautiful wines but perhaps what came as quite a surprise was the truly incredible and captivating story of the man who we were there to meet. Born in Budapest in 1949 Nimrod escaped Communist rule in 1971 by swimming from modern day Slovenia to Italy. He spent a year being moved from refugee camp to refugee camp before eventually travelling to the US in 1972. From then on, it’s your proper American dream, Hollywood film script kind of story. Learning enough English to enroll at the University of Colorado the next years were spent learning various aspects of business management and before long he was marketing director of a major cable TV corporation in the US. After heading back to Europe for various cable TV ventures Nimrod retired from the corporate world in 2009 for a more sedate life concentrating on one of his lifelong passions, wine.

His winery is situated in the sleepy and picturesque town of Eger, a town nestled in the Carpathian basin with vineyards enjoying a sheltered position and a long, hot growing season. Eger is probably best known for its Bikavér (Bull’s Blood), a tannin rich, hairs on your chest style of wine with all the subtlety of a punch to the sternum. Bikavér is a blend anchored by Kékfrankos that must contain at least 2 other grape varieties, but what’s wrong with showing Kékfrankos in all its solitary glory? Luckily Nimród is a man who can see the uniqueness and potential in each separate variety, so as well as making the aforementioned Bull’s Blood, specialises in some single varietal wines that he’s linked to his other passion, Jazz – nice! 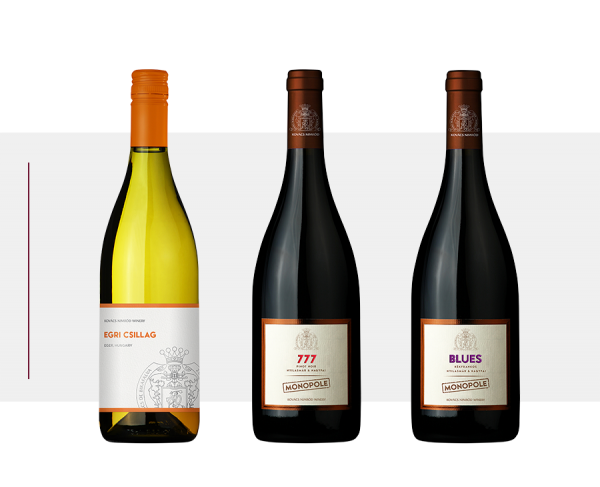 Kovács Nimród Egri Csillag 2016/17
The white wine of the region, Egri Csillag (star of Eger) is a blend of 30% Welschriesling, 30% Leanyka, 20% Szürkebará and 20% Chardonnay… if I were you, I’d say “indigenous blend and some Chardonnay”. Fermented and aged in stainless steel this is all about freshness. Crisp apple acidity coupled with citrus zest, drink it and enjoy saying ‘Egri Csillag’ in your best Sean Connery accent.

Kovács Nimród Monopole 777 Pinot Noir 2013/15
The 777 here refers to the Dijon clone of Pinot Noir used, planted on a mixture of Premier and Grand Cru vineyards. Eger’s long warm summers help to fully ripen the grapes producing a wonderfully elegant and complex wine. Silky smooth in texture, ageing in a mixture of French and Hungarian oak has produced a palate of ripe cherry, blackcurrant and hints of liquorice.

Kovács Nimród Monopole ‘Blues’ Kékfrankos 2014/15
If you do have the blues this is sure to shake them loose. 100% Kékfrankos, this is one of the wines in Nimród’s ‘jazz’ series. The idea is that making wine, initially at least, is a bit of an experiment often inspired by a passing idea, and like jazz music that started from a spontaneous thought, over time will bloom into a masterpiece. If that made you scoff, (yeah us too) it’s still a bloody good wine. Kékfrankos has an inherent earthy character and in this example, is paired with pretty red fruit. 22 months in 30% new Hungarian oak and 70% second fill French oak produces a wine with a delicate nuttiness to offset the bright red currant fruit. 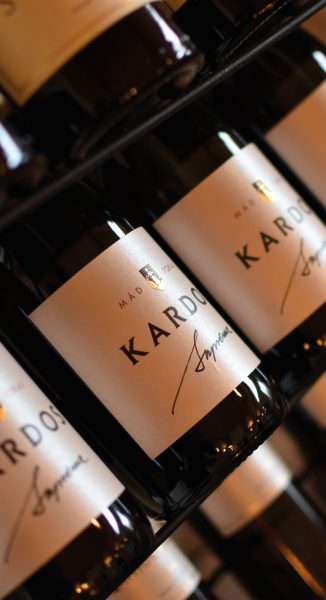 After a lunch in Eger that included enough poppy seeds to induce an opiate overdose it was back on the road to Mád. If you’ve not been to Mád you’d struggle to find a place whose name less accurately describes its feel. On our way to meet Gábor Kardos we phoned ahead to make sure we wouldn’t get lost on arrival, “it’s just the white building on the right” came the response, a metropolis it’s not. Thing is though if you live in a relatively sleepy village you come to learn of all of its hidden plots, you build relationships with your neighbours and you become an absolute master of the land in the area in which you live. With the winery in the family since 1989 Gábor Jnr is a true master of Furmint.

Since the 1700s liquid gold Tokaji Aszú has been oozing slowly from the region, the high levels of moisture in the air perfectly offset by wind and sunshine aplenty make the perfect place for noble rot to flourish. While sweet wines are still very much enjoyed it’s the new generation of dry Furmints that are really getting us excited. Mád’s mineral-rich, rocky and volcanic soils are perfect for producing full-bodied wines with powerful acidity. Gábor has vineyards in Mád itself as well as the neighbouring villages of Rátka and Bordrogkeresztúr (in your own time), his ethos of strict harvest yields and minimal intervention has producedsome truly astounding results. A savvy mind with an ear always close to the ground has also meant Gábor rarely misses an opportunity to improve his estate.

Kardos Dry Furmint 2017
Until this wine came along, Kardos’ extremely fine Furmints came at a premium but thanks to owner and winemaker Gabor’s encyclopaedic network of friends and growers he has secured the long-term contract for a mineral rich Furmint vineyard capable of delivering a decent sized annual production. This is linear and poised and should help further propel this varietals reputation, especially given its fantastic price point. 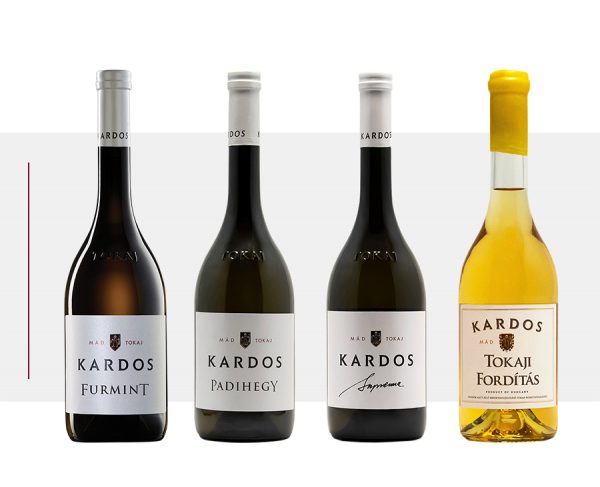 Kardos Padihegy Furmint 2015
For me this was the undisputed wine of the trip, we tasted a few different vintages and they were all simply stunning. 100% Furmint hand harvested from the Padihegy vineyard where vines have an average age of 40 years. Again, it’s had wild yeast fermentation and 6 months in barrel resulting in herbal, delicately creamy and gentle oxidative notes, this a really grown-up wine and one that will reward patient cellaring. Perfect conditions for noble-rot in 2016 and 2017 have meant that all of the fruit from the Padihegy vineyard have gone to make Tokaji Aszú making this dry Furmint a limited treat.


Kardos Supreme Furmint 2015
A blend of 85% Furmint and 15% Hárslevelu from select vineyards in Rátka. Barrel fermented with wild yeast and then aged in used oak for 6 months the wine has a mid-weight palate with pronounced acidity. Gábor’s wines are evolving all the time and this is no different, every sip makes you re-think.


Kardos Tokaji Forditas 2013
No visit to Tokaj would be complete without a taste of the region’s nectar. Furmint’s thick skin allows the noble rot to take effect without the grape bursting and spoiling. Spectacularly honeyed, an exotic treat that everyone should experience.


So, there you have it, ravaged by phylloxera in the 1880’s, repressed by two world wars and 40 years of communist rule you can see why Hungarian wines have never really hit the mainstream. They may be considered a well-kept secret for now, but we hope that doesn’t remain the case for long.

On Our Travels, Our Stories