harrym A wine geek with a love of the esoteric. Marketing Manager for France, and not all that bad when you get to know me.

We were fortunate enough to have Aurélie Lardet from Lavau visit our London office recently, and not only did she bring with her some really great wines from Domaine La Décelle and Château Maucoil, but she also taught us all quite a few things about grape growing in Valréas and in Châteauneuf-du-Pape.

Lavau is a family business, founded in 1964, and has been working closely with Boutinot for about 30 years. Originally solely a négociant, the family began bottling its own wines in 2009. The company now works with 350 growers across the southern Rhône and vinifies 100,000hl of wine each year, and also owns 4 domaines with over 190ha of vineyards.

Valréas was founded in the 9th century, at the beginning of Charlemagne’s reign. A person named Valère established an estate on the banks of the River Coronne where the town now stands. Over time, this large estate was joined with the neighbouring priory of Saint Vincent, named after the patron saint of viticulture, giving rise to the first settlement on the site. The town of Valréas is a canton of Vaucluse that was founded in 1317, when Pope John XXII purchased the land from Humbert de Montauban to ensure his supply of the area’s wine after crediting it with miraculously curing his ill health. His successor, Pope Clement VI, later bought the villages of Visan, Grillon and Richerenches, creating what is still known as the Enclave des Papes.

Domaine La Décelle was purchased by the Lavau brothers in 2010, and it was bought in three parcels; it now totals 100ha of vines. This might not be a huge vineyard area in other parts of the world, but the entire Valréas appellation is tiny and covers less than 500ha! Located in the very north of the southern Rhône Valley, Valréas is planted with more Syrah than the Côtes-du-Rhône villages further south thanks to its interesting terroir. Lying at 350-400 metres above sea level, it is a very windy region and it can be as much as two degrees cooler than in Cairanne to the south. It also has a notable diurnal temperature swing, and these fresh nights help to slow the ripening of the grapes and to generate pure, elegantly fruity styles of wine.

Château Maucoil (pronounced “moh-kwahl”) in Châteauneuf-du-Pape has a longer history than most estates we represent. It served as a base for Roman legions who were attracted by the spring that runs through the property and by the proximity of the Via Agrippa; and from the 17th century onwards it was owned by a succession of winegrowing families. The Arnaud family, who already owned vines in Châteauneuf-du-Pape, decided to purchase the estate in 1995 and devoted a great deal of energy and passion to Château Maucoil. Bénédicte, the Arnauds’ youngest daughter, and her husband, Charles Bonnet, took up the torch in 2009, with a strong desire to secure the future of the estate and to manage it in an environmentally responsible manner. They began the process of converting to organic viticulture in 2011, becoming fully certified in 2014. Along the way, in 2013, they partnered with Frédéric and Benoît Lavau and the four now run the estate together.

The 13 permitted grape varieties of Châteauneuf-du-Pape, and their percentage of total plantings

Châteauneuf-du-Pape was the first region in France to be granted Appellation d’Origine Contrôlée status in 1936, and is possibly most famous for being the wine made with anything from one to all thirteen of its permitted grape varieties. Historically, vineyards were not planted monovarietally as they are today, and it was common to find vines of all thirteen of the local grape varieties growing together. The grapes were all picked at the same time despite their varying degrees of ripeness, and this combination of ripe, underripe, and overripe grapes provided the wines with balance and freshness. Château Maucoil is one of only eight domaines to still use all thirteen grape varieties in its wines. Until we were told by Aurélie, none of us was aware that Syrah is excepted from the Châteauneuf-du-Pape appellation law requiring all vineyards to be gobelet pruned. The reason being that the other Southern Rhône grape varieties naturally grow in an upright shape, but when gobelet pruned the Syrah vine’s horizontal shape tends to result in the grape bunches dragging on the ground and being shaded by the leaf canopy. The other well-known Châteauneuf-du-Pape fact is that its vineyards are covered in galets roulés – rounded “pudding” stones – that absorb the daytime heat and radiate it back into the soil during the night. This is true, but it is only part of the story of Châteauneuf-du-Pape’s terroir. Aurélie explained that there are four soil types in the region, roughly distributed as follows:

The 4 soil types of Châteauneuf-du-Pape

The galets roulés soils, often with clay underneath, give full, generous wines; limestone soils provide minerality; and sandy soils offer elegance and freshness. Grapes from parcels of vines grown on a range of soil types are often blended, but at Château Maucoil – in the very north west of the appellation – its red Châteauneuf-du-Pape is grown solely on sandy soil for the vivacious approachability it provides. On the other hand, its Privilège cuvée is made from old vine fruit grown on the 100% galets roulés soil of the plateau. 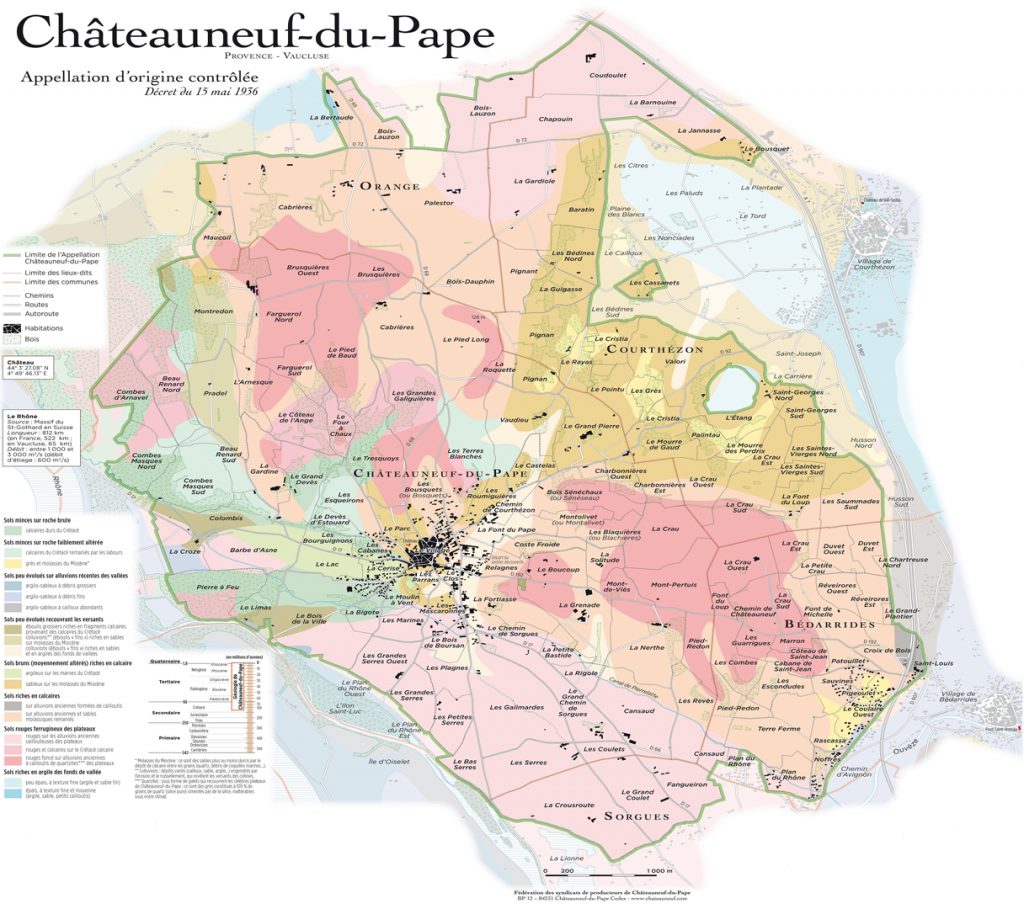 Châteauneuf-du-Pape is a warm region, seeing a similar amount of sunshine each year as does Los Angeles. As a result, the impact of a warming climate is particularly keenly felt as it makes it increasingly difficult to retain freshness in the wines. Château Maucoil is able to combat this in two ways. Firstly, the estate is fortunate to possess a lot of old vines. Châteauneuf-du-Pape was one of the first regions of France to be hit by the devastating phylloxera outbreak in 1866, but it was also one of the first regions to replant vines subsequently. As result, unlike in many other parts of the country, there is quite a number of plots of ancient vines still being farmed. Maucoil carefully tends its old vines as their deep-reaching roots give them greater access to water stored in the soil, even during hot, dry summers. Secondly, its organic viticulture helps to aerate the soils, which enables the vines’ roots to penetrate deeper with greater ease and allows rainwater to soak in and be stored rather than run off and remove topsoil.

Out of This World

In case all of this background information hasn’t whetted your appetite enough to want to rush out and try Lavau’s wines, maybe my favourite piece of local legislation will change your mind:

In 1954, during the heady, early days of the space race and of B movie extra-terrestrials conquering Earth in their UFOs, the village of Châteauneuf-du-Pape decided to protect its vineyards from alien attack and passed a municipal decree banning flying saucers from landing in, taking off from, or even flying over its vineyards; a ruling that is still in effect today. No-one has been able to tell me what provisions are in place to enforce this, but they are certainly effective – the area has been free of flying saucers ever since. 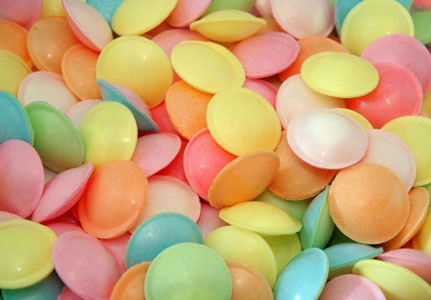 Close, but no cigar (volante)

We don’t yet stock all of these wines, but keep an eye out for new arrivals.

Château Maucoil, Châteauneuf-du-Pape Tradition Blanc 2016 [Organic]
70% Grenache Blanc, 15% Clairette, 10% Bourboulenc, 5% Roussanne (13% ABV)
Grown in limestone soils close to the river in the southwest of the region. Only the Roussanne portion of the blend is oaked. Honeysuckle and citrus on the nose, leading into a bright, mineral-inflected and very elegant palate that is subtly floral and beautifully textured. Very classy and very long.

Domaine La Décelle, Le Carré Valréas Côtes-du-Rhône-Villages Rouge 2015
60% Syrah, 40% Grenache Noir (15% ABV)
Le Carré is a perfectly square, single vineyard on a south-facing slope with great exposure to sunlight. Such is the quality of its grapes, its wines are bottled separately. 24 months in new 228 and 450 litre French oak barrels. A rich, ripe and oak-scented nose. Bigger and fuller-bodied than the regular Valréas above, with bold fruit, plenty of ripe tannins, and a long, warming, dark fruit and mocha-infused finish. 3,000 bottles.

Château Maucoil, Côtes-du-Rhône-Villages Rouge 2017 [Organic]
50% Grenache Noir, 25% Syrah, 25% Mourvèdre (14% ABV)
Grown on a mix of galets roulés, clay and sandy soils, and made without oak. Elegance and freshness seem to be the catchwords at Maucoil, and this is no exception. Not at all heavy, it is finely structured and harmonious with bright, red berry fruit and good length. Classy.

Château Maucoil, Châteauneuf-du-Pape Tradition Rouge 2016 [Organic]
Traditional Blend (15% ABV)
The grown up version of the Côtes du Rhône above. Grown entirely on sandy soils, 80% spends 12 months in 2-3 year old barrels and the remainder is aged in tank. Bright fruit, subtle savoury spice, ripe tannins and vibrant acidity. Open, approachable, and very easy to drink already but with a good life ahead of it.

Château Maucoil, Cuvée 1895 Côtes-du-Rhône-Villages Rouge 2017 [Organic]
100% Grenache Noir (14.5% ABV)
Châteauneuf-du-Pape was hit by phylloxera in 1866, but in 1895 vines were already being replanted on grafted rootstock. These vines are still around today and are producing some seriously fine quality fruit, albeit in very small quantities. A 100% Grenache cuvée is unusual in the area, as often its wines can be overly alcoholic and tricky to age. The complexity and concentration of such old vine fruit is complimented by 12 months in a mix of 2, 3 and 4 year-old demi-muids. Rich, ripe and subtly sweet fruit; dark, velvety and alluring, becoming more savoury towards the finish with mineral/graphite notes, dark roast coffee, and a hint of something floral (iris?). Very ripe and fine-grained tannins provided a drying note. Very good indeed. 2,500 bottles.

Château Maucoil, Châteauneuf-du-Pape Privilège Rouge 2016 [Organic]
Traditional Blend (15.5% ABV)
Grown on very different soils from the estate’s “house” Châteauneuf, and aged for 18 months in 30% new barriques and then 18 months in bottle prior to release. Despite its different terroir, it shares a familial elegance with its sibling. A concentrated red and black berry nose, with a sprinkle of oak spice. Similarly concentrated and complex on the palate, the ripe fruit balanced by a hint of dark coffee savouriness. Well-built yet balanced, the winemaker has adroitly retained freshness in a wine with such a long future ahead of it. 8,000 bottles. 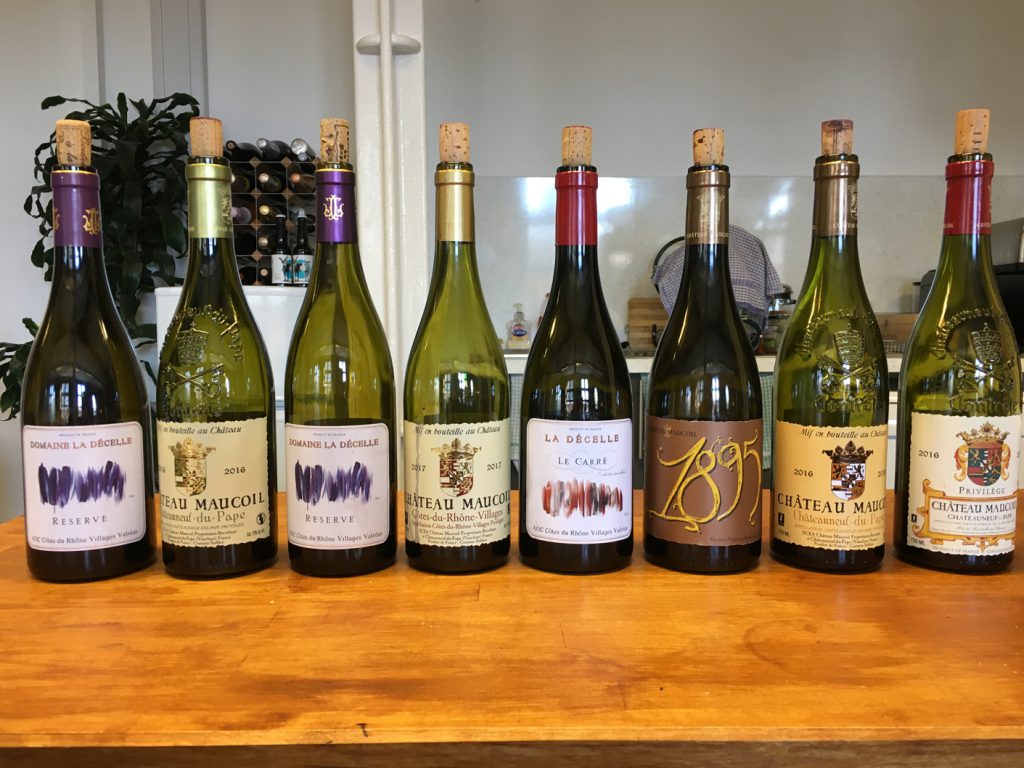